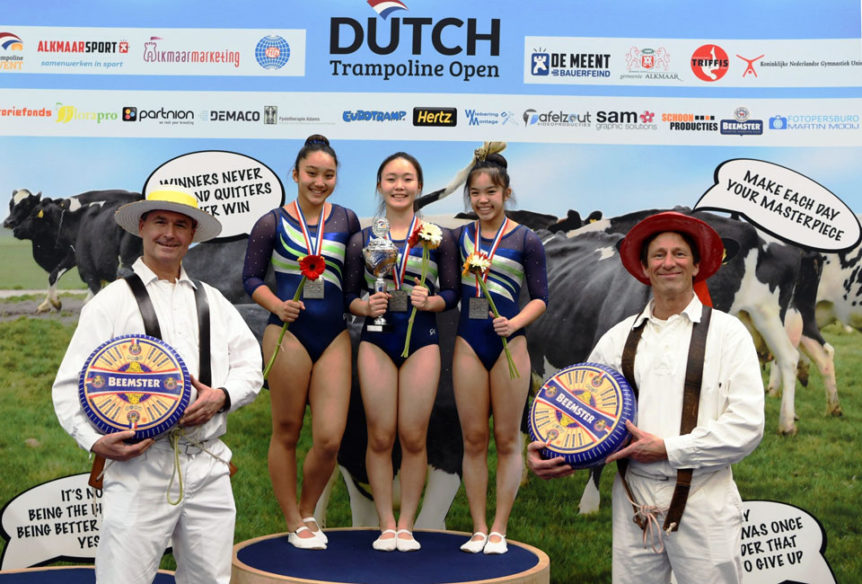 Three Hawaii gymnasts competed in the Dutch Trampoline Open in Alkmaar,
The Netherlands, with 350 gymnasts from Europe and North America. Each
made personal best performances, won medals in their events, and placed
second as a team/country (four gymnasts compete with the top three
performance scores added and ranked). Competing in the 15-16 girls
division this is the second meet that their team scores ranked higher than
any other team/country in their division. At this meet the Hawaii team was
second across age groups combining sexes (149.725 just 1.155 behind
Spain).

Kayttie Nakamura (15, Kaimuki, Kalani High School, member of the US senior
national double mini-trampoline team and the US junior national trampoline
team) won the bronze medal in the individual trampoline event (51.345,
just 0.28 behind Jessica Clarke GBR), the silver medal in the team
competition, and the gold medal in synchronized trampoline with her
partner Senter.

Sydney Senter (15, Aiea, Hawaii Baptist Academy, member of the US junior
national trampoline and double mini-trampoline teams) was 4th in the
individual trampoline event (51.245, just 0.38 behind 1st), the silver
medal in the team competition, and the gold medal in synchronized
trampoline with her partner Nakamura.

Maia Amano (14, Manoa, Saint Andrews Priory, member of the US trampoline
elite development team) was 7th in individual trampoline (49.640, -1.885
behind 1st), the silver medal in the team competition, and the bronze
medal in synchronized trampoline with partner Joana Abrantes from Portugal
(43.505, -3.265 behind winners Nakamura and Senter).
All three gymnasts posted career highest marks at this event and performed
routines with the highest difficulty in their age divisions. They
especially enjoyed the cultural experiences including inside tours of a
working windmill, seeing the cheese runners, watching a shoemaker quickly
make wooden shoes, eating local foods, and the generous Dutch hospitality.

For a description of the event go to: dutchtrampolineopen.com

USA-Gymnastics, the official national governing body for the Olympic sport
of gymnastics, has six disciplines (women’s artistic, men’s artistic,
trampoline and tumbling, rhythmic, acrobatic, and group) each with ability
levels 1-10 (called the Junior Olympic Development Program) and levels
11-12 (called the Elite or Olympic Program) within each discipline with
age divisions. It is from the latter program that national teams and
international assignments are made.

High resolution/definition photographs and video are available upon request.