Academy President, Interim Director, Head of the Departments of Research and Academic Instruction, and Pearl Harbor Interim Site Manager
Dr Max was a gymnast, head coach (club, high school, and college for boys and girls at all levels), club owner/director in Montana and Colorado, elite national women’s judge, exercise physiology and biomechanics researcher, national statistician, international clinician, and equipment design consultant. He began coaching in 1970. He is an internationally distinguished research scientist who has had appointments in European and American universities including the University of Hawaii (Geriatric Medicine, Gerontology, Kinesiology, Psychology), Technische Universitat Eindhoven (Gerontechnology), University of Southern California (Human Factors, Ergonomics, Safety Science, Systems Management, Gerontology), University of Minnesota (Transportation Studies, Intelligent Transportation Systems, Kinesiology), and Pennsylvania State University (Kinesiology, Ergonomics & Applied Physiology, Human Performance Research). He is a father of four girls who all competed nationally and internationally. He occasionally coaches and judges the elite-level trampolinists and teaches the seniors exercise classes (oldest=101 yrs). Because of the age-group world champions and senior elites on US international teams he coached that represented America in the World Games, World Championships, World Cups, and other international competitions, in 2013 he was named Master of Sport by USA Gymnastics. Recently he started ninja training programs to permit physical fitness and obstacle course training for all ages and abilities (modeled after America Ninja Warrior on television).
Donna Mah, MD - Academy VP & Medical Director

Dr Mah was a Hawaii State champion gymnast who became a high school (Punahou) and college (University of Denver) All-American. She was voted the team captain at each school she attended and received outstanding scholar-athlete and most inspirational gymnast awards. She started coaching in 1978 and loves working with gymnasts of all levels and ages. She completed her bachelor’s degree in Pre-Medicine at Penn State, her MD at the University of Hawaii, and her pediatrics residency at the University of California-Irvine. She is a board-certified Pediatrician (with special interest in pediatric sports medicine) in private practice, Clinical Assistant Professor of Pediatrics at the University of Hawaii John Burns School of Medicine, small business owner, mother of four girls (all competing for the Academy). Dr Mah is the Adult Trampoline Program Head, teaches the adult classes (19-49yrs) and wherever needed on all teams.

Coach Justine is a graduate of Kamehameha High School and Wilson College, Chambersburg, PA, where she competed on their gymnastics teams (ILH & NCAA Division 3). She has a masters degree culinary arts, a bachelors in Business and a minor in Athletic Coaching. She is USAG safety certified and a professional member. Her expertise is in gymnastics but she is expanding to trampoline, tumbling, and team coaching. She is especially talented at teaching PE/Recreation classes and managing special events and contracted services. She is one of our ‘top gun’ for birthday parties and special events. She’s a great organizer and people person.

Mrs Onigama takes care of all member registration, employee payroll, tuition accounting, income, and expenses. She has been with HA since it started in 1999.

Coach Mia is a state and regional level artistic gymnast, state and national champion trampolinist, high school cheerleader, and college dormitory resident adviser. Mia keeps herself very busy as the Academy Director and Chair of its largest department (Physical Education). Her technical knowledge is quite exceptional and she has worked at HA since it opened in 1999. She started at HA as a competitive artistic and trampoline gymnast, received a BA in communications from Eastern Washington University, taught English as a second language in Japan and Italy, received an MAT (Master’s in Teaching) in elementary education from Kansas State University, and returned to HA in an administrative role after experience in many forms of educational and services industry management. She loves international travel and actively pursues improving her administrative skills. She is currently a second grade teacher at Pearl City Highlands Elementary School and substitutes in many rolls at HA, as needed.

Coach Nani, is the most decorated gymnast at the Academy, in Hawaii, and one of the most in the nation. She is a 3-time Age Group WORLD CHAMPION (<18 yrs) on double mini and trampoline. She is also a six-time national champion and one of our top coaches/judges. She was the top senior elite on the US women’s team and often medaled at world level competitions for ten years. Her instructional skills are exceptional, her classes are always full, and she does the most training of her instructors of all the Physical Education programs.  In 2014 she was one of the US National Team Coaches for the Age Group World Championships where three of her gymnasts represented the US and two received medals. Although a young coach, she has produced many national and world age-group champions. She received her BEd in elementary education from the University of Hawaii and her MEd in elementary education from Michigan State University. Currently, she spends most of her time as Ms Nani, a 2nd grade teacher in Waipahu.


Coach Kira is a recent graduate of the University of Montana in photo journalism, a professional photographer (Montana and Hawaii), and research contributor in trampoline gymnastics. She was the head trampoline coach at Roots Acro Sports Center in Missoula, MT. She was a US national champion and international competitor on trampoline and double mini-trampoline. She also won invitational championships and competed nationally in fitness (figure) events. Now focusing on her photography and coaching, she has won several photo contests/awards and has produced national champion gymnasts in Hawaii as well as regional champion and national medalist gymnasts in Montana (a program she created). She and her husband (James Mclean) live in Brisbane, Australia.

Fun Night Program Head, Recreation Department Chair, and Instructor
Coach Scott was a competitive Gymnast and a state, regional and national age group champion. He has coached both men’s and women’s artistic gymnastics along with a variety of movement for the last twenty years. Coach Scott has given private training sessions to many world champions and athletes in a variety of sports. His own training in gymnastics and his experience in martial arts tricking, parkour, break-dancing and a variety of sports gives his training methods versatility. He currently is the program head of our Monday and Friday Fun Nights. Our fun nights are one of the only open gym formats in Hawaii, but unlike other “open gyms” Hawaii Academy offers a structured program with instruction, challenge and spotting. 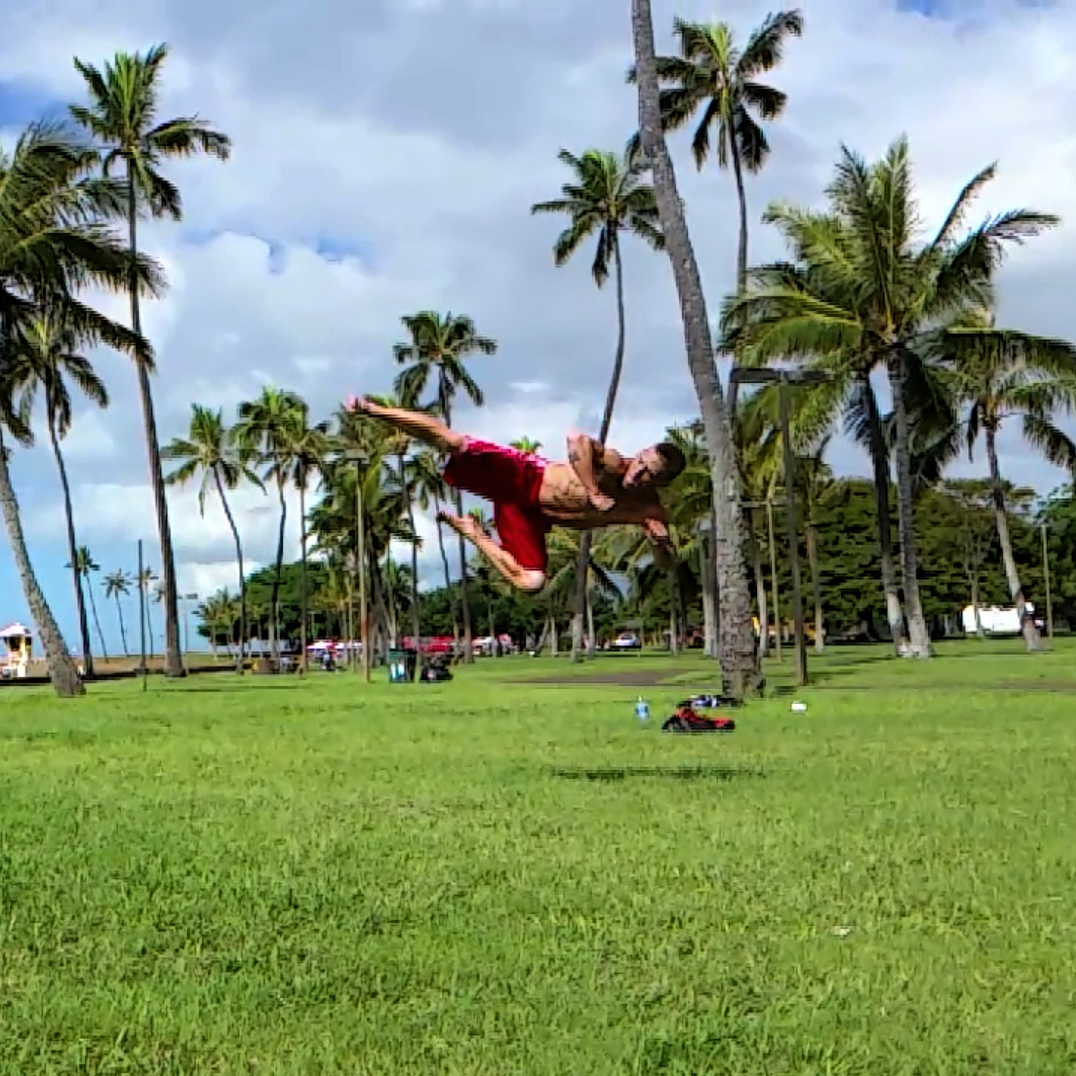 Teacher Mike is a well-qualified instructor having earned a Bachelor’s Degree in Physical Education and certificate in Early Childhood Development from Long Beach State University in California. His 25 years of past gymnastics experience includes being a USA Gymnastics National Safety Instructor, an NCAA University gymnastics coach at Long Beach State University, a Compulsory Team Coach, a USAG Skill Evaluator, a Trampoline-Tumbling judge (levels 1-5), the past Gymnastics Director at Hickam Gymnastics, and of course a very fun-loving Parent/Toddler and Preschool Instructor here at HA. After teaching Physical Education at various YMCAs and Long Beach Unified Schools, he has been a wonderful addition to the Academy’s staff, always willing to do more than just teach. And when he’s not busy engaging kids in his classes, he enjoys spending time with his wife and dog, gardening, and pretending that he knows how to play guitar well.